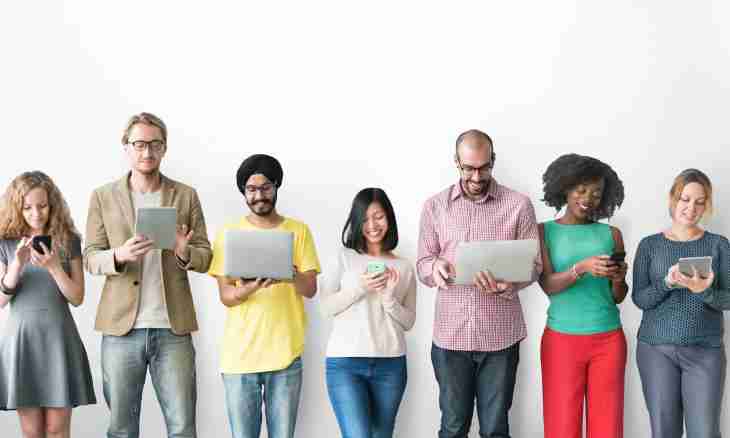 One of the most interesting phenomena of the present, from the point of view of psychologists, are social networks. For several years their users were millions of people who find friends and partners there, sell the products and share details of the private life.

1. The popularity of social networks continues to grow. It has a talk their availability, high speed of exchange of information with any people including who are in other country, and even along with many people. The term "social network" appeared in 1954 thanks to the sociologist from the Manchester school James Barnes. However existence of networks in reality became possible when the Internet became widely available to people. At first communication, including groups of people, was carried out via e-mail, teleconferences appeared then. Then communication in real time became possible. Initially it was necessary for exchange of information between the companies and for business communication.

2. Social networks took the modern form when the Internet became available to a general population. There were special websites - Classmates.com (in 1995), then Facebook and others where people could support communications with friends and acquaintances not to lose sight of them. Communication became more and more informal, there were communities and groups with common interests. On open spaces of social networks the special style of communication began to be formed. It differs in big freedom of expression, the user is able to afford in virtual communication much more, than in a real conversation with the interlocutor face to face.

3. For many social networks became an outlet and entertainment in the conditions of high employment, on one page everything is collected - contacts of friends and acquaintances, videos, music, photos, news. There is no need to pick up the phone and to dial number of the person, and then to keep up with him the conversation if he can send the message and in it to write everything that is necessary.

4. There are people who on social networks are attracted by a possibility of acquaintances to the purpose of setting of the friendly, romantic or sexual relations. At the same time the fear to undergo criticism or to be rejected is not so high, as in real life as the opinion of the stranger does not strike such blow to the ego. Besides, the personality can be hidden if desired.

5. One of secrets popularity of social networks that people like to watch life of others - to read them to news, to watch photos, etc. It, on the one hand, can be compared to viewing series which helps to distract from own problems. Also it is a way to be inspired by others progress and a way of life, or, on the contrary, to be glad that at everything it is not so bad. But if some like to observe, then others - to parade the life. Most often such people try to embellish the life - expose only the best pictures with high-quality processing taken on travel and restaurants where they are cheerful and sure of themselves. It is a peculiar way of self-affirmation and obtaining attention.

6. Not all people have high sociability and not all manage to construct the harmonious relations and to have pleasant communication in real life therefore they compensate it by communication on the Internet, in communities and different discussions. It is also relevant for people with phobias which limit their social activity. On the Internet they communicate with adherents, look for support and the moral help. Someone also pours out the aggression in venomous comments, being exempted from a stress.

7. For some people the social networks turn into the true dependence. There was even an expression "to live in the Internet". Now, when it is possible to go on-line from mobile phones, it is possible to be constant online. And as special applications allow to share instantly photos, for a number of people began habitual to remove everywhere - in cafe, on the street, in the bathroom, in the museum and cinema immediately to post a photo. Without photographing function they feel not comfortably. And the younger generation often in principle does not represent what it to exist without the Internet and online communication.