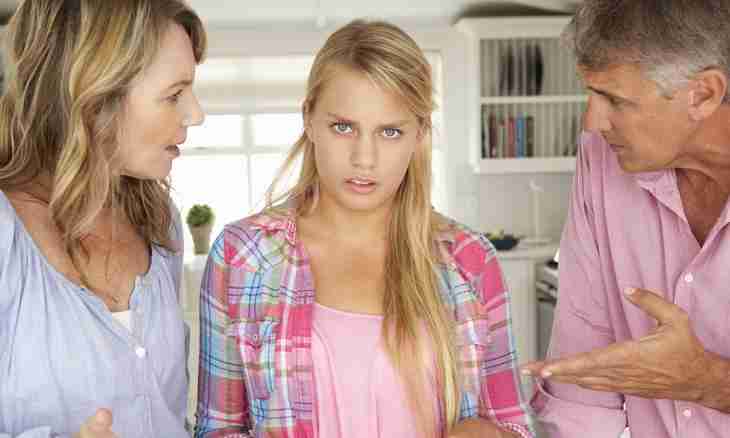 Teenager's conflicts with peers. How to behave to parents

The conflicts at teenagers arise not only with adults, but also among themselves. At the same time companionship with peers is very important for the teenager. On the conflicts in school and in the yard, teenagers often react sharply and painfully. How to behave to parents who want to help the child to cope with difficulties in communication?

Do not accuse of all the teenager

For the teenager it is very important to be accepted among peers, full and confidential communication. In what paints the teenager will perceive further life depends in many respects on that, to learn to trust he, to be on friendly terms, love and to communicate in school days. Therefore it is not surprising that during the teenage period when in general everything is taken very sharply, the teenager hard reacts to the conflicts and lack of mutual understanding with peers.

Find out in what the reason

First of all it is necessary will talk with the teenager. Learn from him what occurred as he sees the situation reasons. If the teenager becomes reserved and does not want to communicate, then it is worth learning situation details from the class teacher of teachers. At the same time, as you understand, teachers are also not always fair and objective in relation to the child.

Adults not always need to interfere with the conflict between teenagers

The task of parents is to understand, the problem is how serious. If it is just about a quarrel of the best friends, then though such conflicts at teenagers proceed violently, but direct intervention of the adults trying to reconcile participants – the worst that can be offered. The best friends can be reconciled and quarrel several times a day, at boys quite often business ends in a fight. You will provide to teenagers to agree and solve the problems – at them it remarkably turns out!

The most useful that you can make – to tell the teenager about more "civilized" ways of a solution to the conflict, to show practical benefits of a compromise. Only it is necessary to do it not to a form of morals of good behavior, and in the form of a friend advice, an example from own experience.

It is absolutely other situation, the attention and intervention of adults is required here.

Teenagers are quite aggressive, and, perhaps, in each group, in each class there are "derelict" or "black sheep". It does not mean that in fact this child "the worst". Not such as all is not negative characteristic, on the contrary, the child can differ from others "with a plus"

Problems in communication with peers, absence acceptance from group, a class by the teenager are perceived very hard – can become the reason for a depression and even a sutsid.

If you as the parent, faced such problem of the child, then do not neglect everything, do not accuse the teenager. It is very serious problem with which the teenager not to cope. Intervention of teachers in "the cool conflicts" can only aggravate a situation – peers will begin to perceive the teenager as "complainant" that will lead to a bigger rejection and humiliation. Be ready that, most likely, it is necessary to transfer the child to other school. However, that on the new place of a problem did not repeat, and the child coped with consequences of a serious psychological trauma of "izgoystvo" the consultation with work with the good psychologist is necessary. And, of course, your support as the closest to the child of people!