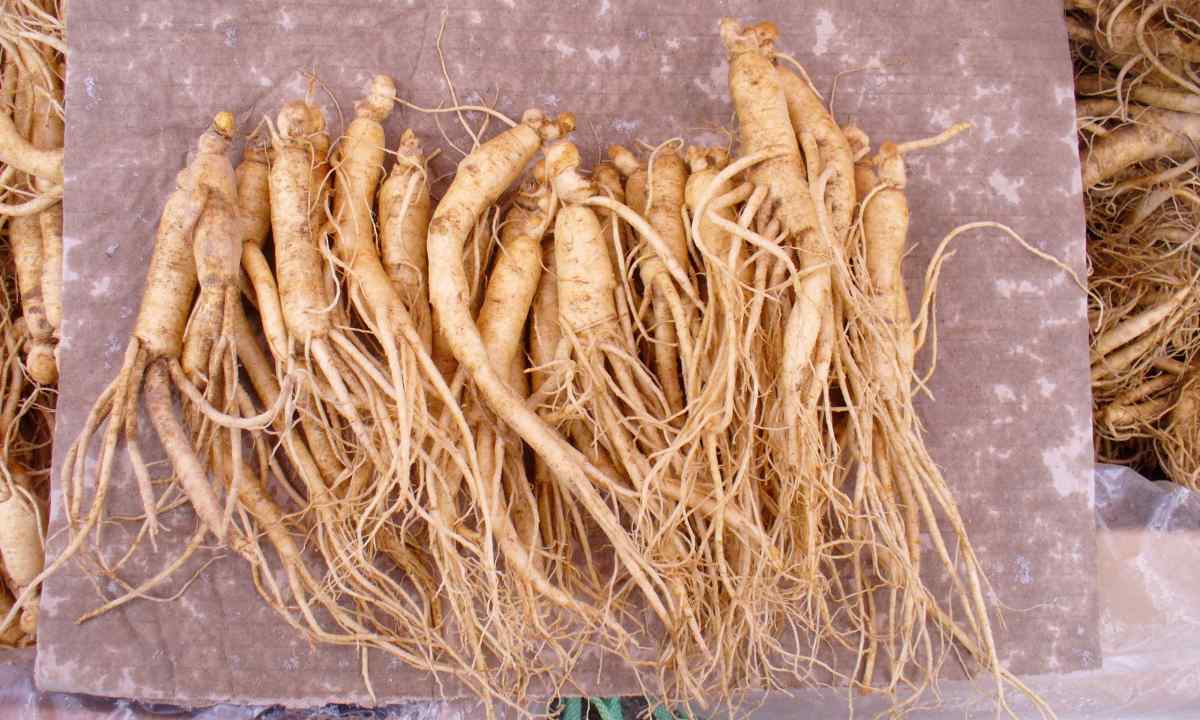 Features of cultivation of ginseng

One of the most difficult features of cultivation of ginseng is unusually long dormant period of its seeds. Not stratified seeds ascend in 22 months after their crops in year of collecting from matochnik. Therefore it is desirable to buy the stratified seeds which at crops will ascend in the spring of the next year in the fall.

Crops are conducted by lines, distance between seeds in line of 5 cm, between lines - 4-5 cm. On the same depth plant also seedling that the wintering kidney was from bed surface on 4-5 cm, only the scheme of landing of 20 by 40 cm. The planting stock is previously processed 0.5% solution of potassium permanganate. The bed is watered moderately and mulch sheet humus or the rerotting sawdust layer 2 cm, for the winter cover with the fallen-down foliage layer 10-15 cm.

In the spring, even before full thawing of snow, bed cover with the warming boards. After thawing of snow to shoots it is necessary to remove foliage or sawdust, carefully to loosen with fingers of hands the soil, then to oprysnut beds and boards of 0.5%-pym solution of the Bordeaux liquid. After shoots of bed spray with 0.1% solution of potassium permanganate, at the beginning of June - again the Bordeaux liquid, but already 1% solution, every 15 days to repeat processing two more times.

The ginseng does not transfer drought, as well as overwetting. Therefore during the summer it is necessary to water or protect beds from downpours, covering with polyethylene film over boards.

In the fall, at approach of frosts, elevated part of ginseng is cut off, leaving ""stumps"" 5-6 cm high for orientation.

The ginseng is damaged by cats, sparrows, sorok and slugs. Measures of pest control are protections of beds grid or grids, removal of any vegetation at distance not less than two meters. Then between beds stack pieces of plywood, roofing material, boards, burlaps - traps for slugs. In the winter snow around beds it is necessary to condense and stack fir-tree branches and also means against mice.

The ginseng can be exposed to number of fungal diseases which pass to it from surrounding grassy and woody vegetation, for example such as fusariosis. Most often young shoots (seedling) of ginseng are ill it that is expressed in emergence of banners on scapes near root neck. Mushroom, settling in vessels, corks them and by that stops inflow of water and nutrients from roots in elevated part. At the same time shoots lose turgor, polegat and perish. For fight against fusariosis the preseeding etchback of seeds and the soil is recommended. At emergence of the centers of drowning of shoots, the soil is spilled 0.25-5% solution of potassium permanganate at the rate of 6-10 liters on 1 sq.m.