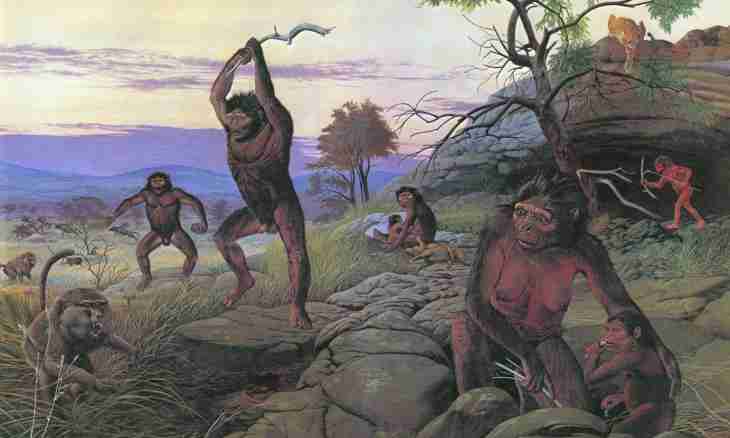 The term anthropogenesis is probably familiar to most of people from a school bench. It comes from two Greek words: anthropos – the person and genesis – origin. Everything is together translated as "origin of the person" and designates that part of biological evolution which concerns origin and formation of modern type of the person (Homo sapiens).

The whole range of sciences is engaged in studying problems of anthropogenesis today: anthropology, genetics, paleoanthropology, linguistics, paleolith archeology, ethnography, primatology, evolutionary morphology and embryology. And the interest of scientists concerns not only formations of physical type of the person, but also process of its initial work, a speech development and the system of communications, rudiments of society here. The following belongs to the main problems of anthropogenesis: the place and time of appearance of the first most ancient people, the main stages of anthropogenesis, its driving forces at separate stages, the factors influencing process of human evolution, development of primitive societies and the speech, correlation of evolution of physical type of the person and cultural and historical progress. The theory of evolution of Charles Darwin is the cornerstone of scientific base of researches of anthropogenesis. According to its provisions in modern science there is an idea of gradual formation of the person of modern type as a result of natural selection under the influence of collective work. As a result of long researches the modern science convincingly proved that the most ancient representatives of Homo sapiens appeared on the earth 400-250 thousand years ago. Most of scientists holds the opinion that the African continent became the ancestral home of mankind. Having arisen in the central Africa, the first communities of ancient people began to extend all over the world, gradually forcing out Neanderthal men and representatives of a type of Homo erectus (the person orthograde). But it should be noted that it is not the only hypothesis today. There is also multiregional hypothesis according to which the arising mankind did not force out other types. Instead, since Homo erectus, evolution of a uniform look within which gene streams could circulate freely took place. What finally led to formation of the person of modern physical type. At the moment it is impossible to tell with confidence what of these two dominating theories is true. Available materials of a paleoanthropology of researchers do not give an unambiguous assessment. At the same time these geneticists more support the African hypothesis which is also vulnerable for criticism.